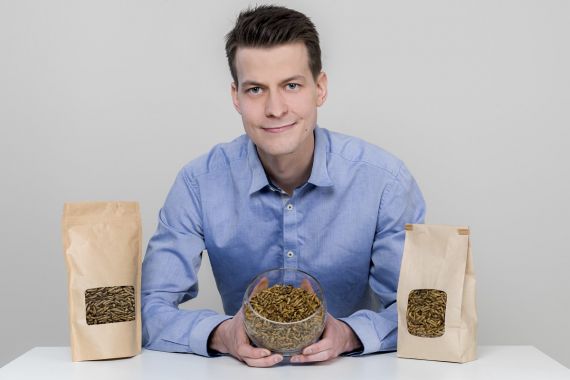 Entosystem President Cédric Provost announced on Tuesday the creation of an insect factory for the production of animal feed and organic fertilizers in Drummondville. (Photo: courtesy)

An insect factory used to produce organic feed and fertilizers will see the light in Drummondville, thanks to Entosystem’s $ 66 million circular economy project.

Sherbrooke SME is striking a blow to commercialize its black soldier fly larvae. In this more than 100,000 square foot automated facility that will employ 70 people, it is estimated that it will recycle 90,000 tons of organic matter annually to produce 5,000 tons of protein larvae and 15,000 tons of organic farming fertilizer.

“The food for these flies comes from unsold groceries such as fruits, vegetables and baked goods,” said president and co-founder Cédric Provost in a telephone interview. The advantage of these insects is that they eat moist organic matter for which there is little outlet when it begins to degrade.

The leader explains that a black soldier fly lays about 1000 larvae in six days before dying. One percent of the larvae are set aside to create the next generation that will produce larvae. With a high protein content, the latter will be dried and transformed into flour for feeding domestic and livestock animals. As for them, the droppings of insects that consume 250 tons of food in six days will be used as organic fertilizer. Entosystem then kills two birds with one stone. In addition to reusing fruits and vegetables that were destined for garbage, he creates a low-impact greenhouse gas protein that requires little water and space and does not generate waste.

“For food we turn to the pet niche, it is a very interesting hypoallergenic product for their owners, explains the boss. And as a fertilizer, with the shortage of organic fertilizers and the disruption of imports of nitrogen fertilizers from Russia, there is a strong demand.

In short, Entosystem, of which one of the partners is Sanimax, specialized in the processing of agri-food leftovers, will not lack outlets for its proteins and fertilizers or raw materials to produce them, given the food waste that prevails in the country.

“This project is a breakthrough, says Cédric Provost. We will be one of the world leaders in insect farming. It is a first factory of several “.

That is why the construction of a second plant within two years is already under consideration. The place has not yet been decided, but “we are aiming for the international market”.

The SME intends to favor a place like Drummondville where the sourcing of organic matter and the sale of the finished product take place nearby. A home run for the short circuit!