To what extent will the Japanese currency unscrew, we wonder the foreign exchange markets? The yen is at its lowest level against the dollar in 20 years – on Monday it was trading at less than 128 yen for 1 dollar – but also against the euro for 7 years – at more than 137 yen for 1 euro.

“The collapse of the yen – which went largely unnoticed in this landscape of economic-health-military crisis – has now become an important phenomenon in the foreign exchange market, because this type of movement does not happen very often, but when it does occur, it reveals in a few days or a few weeks very large and completely unusual discrepancies between the three major world currencies (euro, dollar and yen) “comments Joseph Leddet, specialist in foreign exchange markets.

A situation that worries the United States and Japan. Last week, Japan’s Finance Minister Shunichi Suzuki spoke to Treasury Secretary Janet Yellen to consider a market intervention to prevent the fall from accelerating. “This situation is explained by the negative effect produced by the surge in energy prices due to the war in Ukraine and by the choice of the Central Bank of Japan to refrain from raising rates as the Fed prepares to significantly accelerate its squeeze. monetary “points out Steven Barrow, economist at Standard Bank.

Indeed, unlike other major central banks, the BoJ maintains an ultra dovish approach in the form of continued bond purchases, which even increased last week, to keep the 10-year Japanese bond rate below 0.25. %.

The yen is also a reference indicator for financial markets around the planet that examine its evolution. In fact, the Japanese currency depreciates as international markets appreciate and vice versa. This therefore makes the yen a hedging instrument for arbitrating diversification in asset portfolios.

However, this correlation was not observed with the Russian military invasion of Ukraine launched on February 24. While all equity indices fell, the yen also accelerated its fall in the following days, by more than 10% against the greenback (see chart). An unusual move for one of the major currencies with the dollar and the euro. 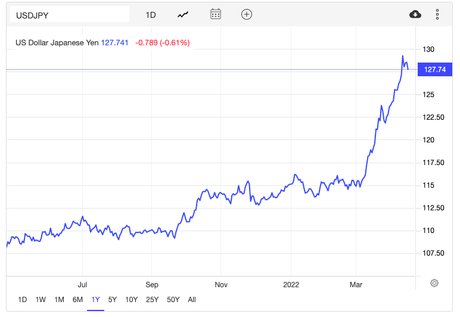 Furthermore, the divergence between the yen and the dollar is changing the attitude of Japanese investors. Those who hold US assets are actually seeing the cost of their hedging automatically get higher and higher.

However, the dollar could strengthen further as the Fed tightens monetary policy. Its chairman, Jerome Powell, never misses an opportunity to tighten the tone. An increase has already occurred in March, the first since 2018. Six increases are expected this year. The flip side of this tightening is the end of the US Treasury buyback program that will begin in May.

Largest foreign holder of US debt

Japan being the first foreign holder of the US debt, with a share of 18.28% (in January) for an amount of 1.303 billion dollars, ahead of China (14.87%) and the United States (8.54 %), it remains to be seen whether Japanese investors will continue to buy US bonds.

The latter, in fact, become mechanically more expensive due to the depreciation of the yen, which reduces its yields, even if they remain attractive compared to other European securities. On Monday, the US 10-year Treasury bill rate was above 2.81%, the British 10-year rate at 1.895%, the German Bund rate at 0.887%. However, with the narrowing of the difference between holding US 10-year bonds and Japanese government bonds, the consequence could be a reallocation of Japanese portfolios to the detriment of US assets.

It remains to be seen how the BoJ will react, which will meet on the board of directors on Thursday 28 April. “That could change. If extreme risk aversion grips the market, the yen could regain lost ground under its safe-haven status. Broadening the 0.25% to 0% range for the 10-year yield. it could become convincing over time “.Steven Barrow explains.

New measures to support the economy

Indeed, Japan cultivates its difference with the United States and Europe. According to projections by the International Monetary Fund (IMF), inflation in the archipelago is expected to stand at 1% in 2022 and 0.8% in 2023, a level well below the BoJ’s target rate of 2%. In March, if energy prices are excluded, consumer prices recorded a -0.7% over one year (after -1% in February), reflecting the low propensity to spend of families in the Archipelago, and therefore they limit the price hike favored by demand.

The government is also studying new measures to support the economy, especially SMEs. More than $ 8 billion could be put on the table to mitigate the surge in commodity prices, especially energy, and grains, for affected sectors such as transportation or the food industry.